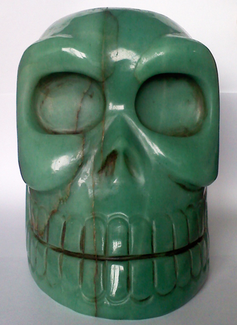 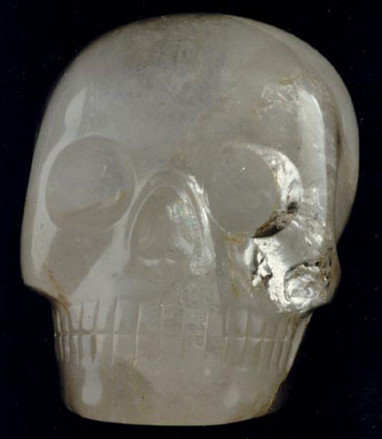 Greenie is owned by Jodi Serota and private and group sessions are frequently scheduled for activation and healing of the Heart Center (4th Chakra). In particular, this Skull works on issues of love, self-worth, relationships, purpose, truth, desire and passion. It also works on prosperity and abundance.

The Green Jadeite Crystal Skull came to be in Jodi Serota's possession after she first spotted it in Mexico and it began communicating with her telepathically. The Skull "told" Jodi that if she took it home, it would help those who came in contact with it with issues related to the heart. The skull weighs 12 lbs. and it is clearly an old and unusual crystal. There is no firm information regarding the age and source of its original carving. "Greenie" has been examined by Nick Nocerino, the founder of the Crystal Skull Society, who acknowledged its power and its rarity.

The Crystal Skulls are just what they sound like. They are crystals that have been carved in the shape of human skulls that have been created as tools to activate consciousness and healing. Some are large...some are from very rare stones...and many are of unknown and untraceable origin, which adds to their mystery. There are ancient carvings and contemporary carvings, but all seem to possess unique qualities.

We have become very accustomed to the various shapes in nature that make up all forms, and one of the shapes that we see every day as we look into the mirror and as we see each other, even at death, the skull formation in prevalent in all human existence. In Sacred Geometry, for instance, various three-dimensional shapes have particular qualities that they emanate just by the nature of their structure...for example a pyramidic structure is for integration, the energy of a sphere relates to movement, and so on. The skull formation is a shape that we've overlooked in relation to its sacredness. Our brain is encased in the shape of a skull, and the structure of the skull helps to conduct the electro-magnetic powers inherent in brain function. And, although our culture over the years has adopted the symbol of the skull to represent death, in metaphysical terms, the sacred shape of the skull represents transformation, or in fact, death and re-birth.

Many who have been in the presence of the Crystal Skulls feel that they are from other dimensional realms and perhaps were used by ancient civilizations (including Atlantis and Lemuria) to sustain contact between Star Beings and the human race. Others who have touched the skulls have had a range of experiences including receiving instantaneous healing, information, visions of other worlds and the experience of unusual sounds and expanded intuitive abilities.

The Crystal Skulls are activated by Sound and Color, and because Jodi Serota specializes in activations featuring multi-dimensional sound and color, she regularly presents two of the most powerful of these incredible artifacts. 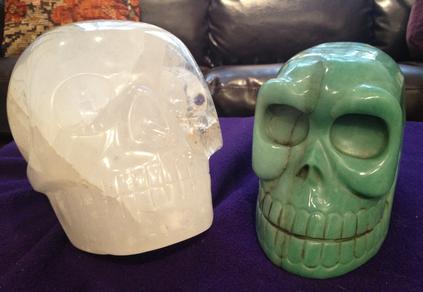